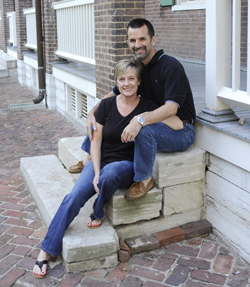 Bill and Rona believe that home is where the heart is, and are excited to be a part of the WordServe family. After serving 21 years in the US Air Force and moving 15 times, they believe they have landed in the best spot yet. They’ve been married 33 years and have 3 grown daughters, two sons in law, and two grandsons who all live in Texas.

Bill was an Air Force officer and pilot from 1985 to 2006. In 2006, the Hogan family settled in Kentucky while Bill attended Asbury Theological Seminary, graduating in 2011. Bill served on staff 4 years and later as associate pastor of Nicholasville United Methodist Church in Nicholasville KY for one year.

Bill’s passion is helping people develop into everything God created them to be. He is passionate about Jesus Christ, family, and teaching/training disciples. Rona is an avid reader and burgeoning gardner. Bill loves to run and gun... literally. Running is a hobby, and Bill rarely passes up an opportunity to visit the range, whether skeet, rifle, or pistol! Bill and Rona love what WordServe represents: a sense of belonging based on Christ’s kind of love. It doesn’t get any better than that! We hope you’ll come and join us…where life is different!

After meeting some retired veterans in the area, Bill was invited to participate as a volunteer in The Xena Project, working to help veterans get readjusted to life after the military. Once they found out he was a pastor, they invited him to be the organization's chaplain. And the rest is history, as they say. This blog is devoted to equipping the spirit of warriors, giving them a faith-based foundation for their lives. Xena Project now serves law enforcement, first responders, and their families in addition to veterans and their families.

Click here to read Bill's blog for the Xena Project.